If you have been on earth and have been advertising online in the last year, then I’m pretty sure you too we’re witnessing the new world order. Apple announced that it’s going to make unprecedented changes to the way advertising platforms like Facebook track private data from their users (and resell it for a profit). Long story short, deciding what happens to your private data is now a choice, not a verdict.

Without going off-topic, I dedicated two different articles to explain Apple’s IOS 14 update and what it means for advertisers.

I highly recommend reading them both.

So let’s dive right into it:

API tracking or also known as Conversions API is a tool designed to send data directly from a server to Facebook. Facebook defines it as the following: The Conversions API allows advertisers to send web events from their servers directly to Facebook. Server events are linked to a pixel and are processed like browser pixel events. This means that server events are used in measurement, reporting, and optimization in the same way as browser pixel events.

Sounds complex? They do it on purpose! Let’s simplify it. Before API tracking was introduced, Facebook used a couple of different tracking methods. They used user (people) tracking by ensuring that users are signed in on every device that they wanted to use Facebook, Instagram, or WhatsApp on. They did this to ensure that there are no anonymous activities. Everything that you do on the Facebook family of apps, they could track. That wasn’t enough, because that would only cover what you do on their apps. Like many other advertising companies, they began tracking your activity off of the apps as well. Meaning, if you would click on a post that would result in you leaving the app, they could still track what you do when you are not in the app. They could see virtually all of your activity2. How did they do it? They use browser cookies which are small blocks of data to identify a user and are used to report back to the platform on what happened on that specific website. So basically when you are on Facebook (or Instagram & Whatsapp) they can track your activity and when you exit they can still follow and analyze your online activity.

Facebook uses this information to understand what you might be in the market for as a consumer but also uses that information to help advertisers reach the most relevant users to their business. Cookies tracking started in 1994, so it’s not something new. What made Facebook extremely successful was the combination of cookies and user tracking which in return, created the technology to be able to “cross-device targeting.” Although some marketers want to make it sound more complex than what it is, cross-device tracking is when you make a purchase or a conversion using more than one device. For example, you click on an ad on your Facebook app on your phone and complete the purchase on your computer. Prior to Facebook, most companies had a difficult time tracking and associating these activities to the same user. The fact that you always have to be logged in all your devices to be able to use Facebook or Instagram, made this easier for Facebook. That’s the history of Facebook’s user tracking in a nutshell.

Then came Apple who literally said that user’s privacy data is a choice and announced that it will stop the abuse of user tracking and forced limitation on how companies like Facebook track user’s data off of their apps. This would mean that what companies like Facebook could track using browser cookies and other tracking methods will be extremely limited. Users will get a notification that will ask if they want to allow this app to track their activity once they leave the app and if they are ok with it. Even though this article is about Facebook’s API tracking, it’s not specifically for Facebook, it’s for all apps that are on Apple devices. The reason that Facebook is the company that is mostly associated with it, is that no other company exploited users’ data as efficiently as Facebook did, and that’s why they are going to be impacted the most from it.

Months before the IOS 14 update took place, Facebook already prepared a rich set of solutions that could potentially facilitate part of the negative impact from the changes Apple was going to make. Conversion API was supposed to be part of the solution. The idea was that the changes that Apple would be making in the IOS 14 updates were going to be addressed in two different parts: The first one being the limitations in cookie tracking that Apple allows complaints to collect and implement. Things like tracking activity from users for as much as 28 days after they click or view an ad, as well as the amount of activity that you can collect from a user. The second change was allowing users to completely shut off the ability for companies to track their activity once they leave the app.

Conversion API was created to meditate on the first part which was supposed to solve some of the lost data that will have a massive impact on the ability to track users. The idea is really simple. Instead of relying on browsers to send back information about the user, let’s just ask the website to send us all the information instead. Along with their partners (Shopify, WordPress, Google tag manager etc..), Facebook created a conversion API that doesn’t require any technical work that’s essentially plug-and-play. Business owners can simply install it and start sending information directly to Facebook and bypassing the browser cookies barriers.

Here is how it looks on Shopify: 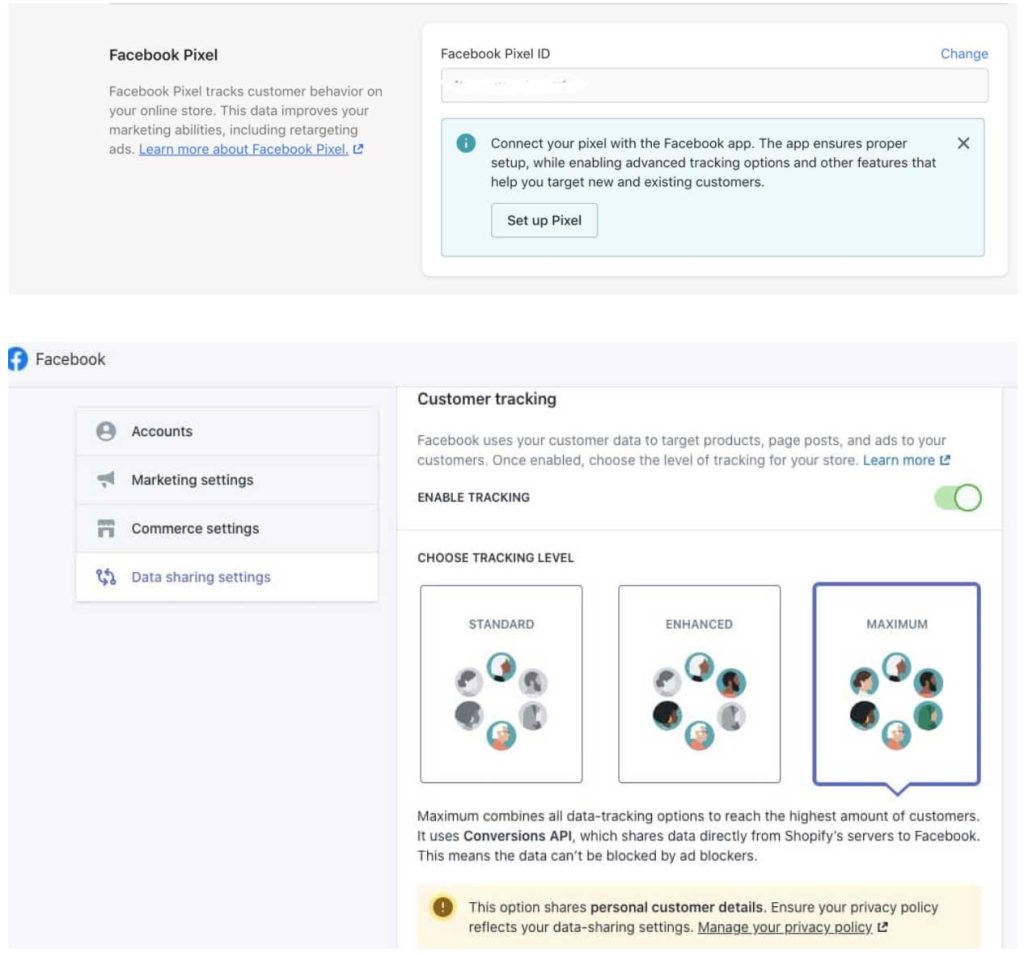 To business owners, maximum level tracking would make the most sense as that would lead them to believe that if they pass on as much data as they can, Facebook in return would deliver their ads more accurately to the most relevant audience. Whether it’s true or not, leaving the user’s privacy up to Facebook and the business that is advertising to them, in my opinion, is beyond wild. Imagine how that conversation between the business and Facebook might sound like. Something like, “So, how much information about the users you want to give me, the more information you give me the better return on your ads you will get.” Insane,I know. It’s important to repeat that even though conversion API might solve some of the restrictions that apple instated on browser tracking, if users decide to opt-out of letting Facebook track their activity off of the app, Facebook will be forced to obey and won’t be able to use and track that user, even with their API tracking. 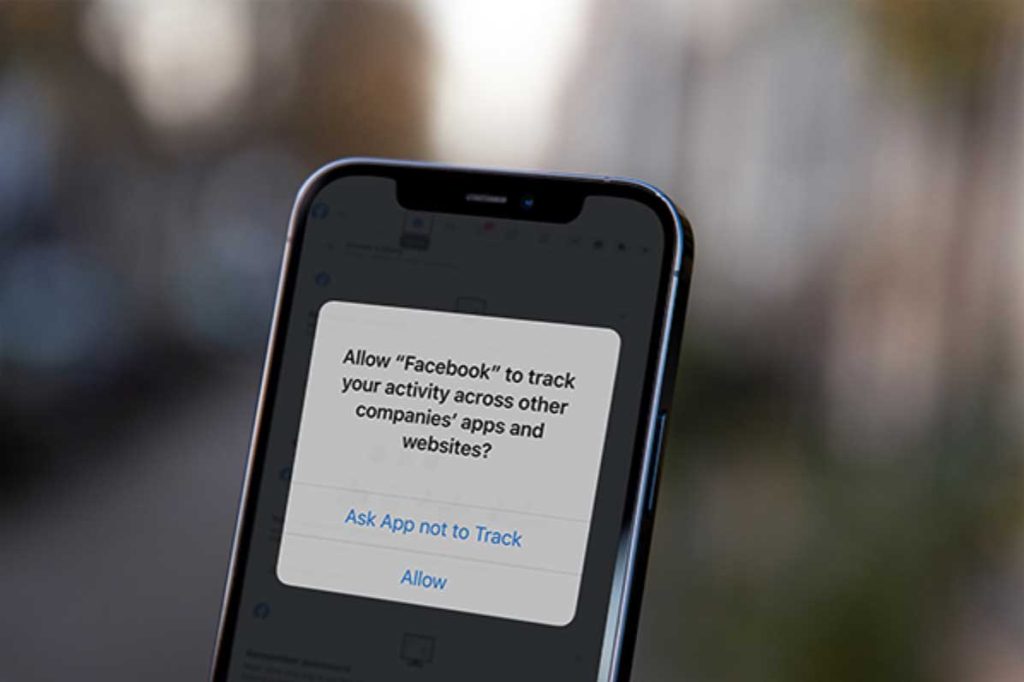 Apple IOS 14 users are now seeing more of these notifications and the most worrying news for Facebook, is that early reports signal that the vast majority of users, ask Apps (not just Facebook) not to track their activity across other companies and apps. This means that if a user does this, conversion API (app tracking) will be worthless for that user. And that is if Facebook follows the Apple policies (which I wouldn’t dare to disobey if I was them).

It’s also important to know that the conversion API could be manually installed on your web server. If your website is hosted on a platform that’s not currently supported by a partner, then you can also visit this page to learn how you can implement conversion API for your business.

It’s the classic hat-trick for marketers.

At the exact time when businesses feared the outcome of how the IOS 14 was going to impact their online advertising performance, a new wave of marketing offers was evolved. Advertisers, marketing gurus, and marketing agencies started to spread the news about this new conversion API tool and how it’s going to dramatically transform ad performance. They relied on the fact that it sounded too technical to some businesses and used it as the bait to grab their potential audience’s attention. Like many of the short-sided tricks in the industry, make no mistakes, if you are interested in setting app conversion API for your ad tracking, then you don’t need a large agency to do so. If you’re using one of the main platforms to manage or host your website like shopify, wordpress etc., then there is already a very simple integration that can help you set it up independently. If that’s not the case, then you can outsource it to a freelancer online or a company who can help you do this one time setup. After that, everything works automatically and you manage your ads like you normally do.

Should I implement Conversion API?

The choice is yours. Getting API tracking won’t guarantee better results. Additionally, I haven’t seen official case studies by Facebook that show the lift in performance of using API tracking yet.

If you haven’t experienced a drop in performance because of the IOS 14 update, then you can hold off before implementing it. If your performance drops dramatically, then you might try API tracking to see if you experience a lift in performance and better results. If you don’t see a noticeable positive change over a long period of time, then you might want to go back to the regular pixel tracking. Remember, Facebook explains why API tracking helps ad performance, but how that information is used to help their own ad platform and help your competition is not very clear as of now.

As you are probably aware by now, Apple implemented a tough new policy that will affect advertising platforms’ abilities like Facebook to track their user’s activity. If you’re not familiar, then check out my other articles NOW WHAT: IOS 14 & YOUR ADS and FACEBOOK VS APPLE: THE WAR ON PRIVACY. Facebook has already taken steps to combat Apple’s new privacy update by implementing a new Conversion API tracking solution. Conversion API works around relying on cookies by gathering user data directly from the source: the businesses’ websites. Business owners can now easily install Facebook’s new Conversation API on their website which allows Facebook to collect and use their user’s data to feed their algorithm. But there’s a catch – if the user asks the app not to track their activity, then Conversion API doesn’t work.

Quietly but persistently, Snapchat ads are gaining momentum as an alternative or secondary advertising social media platform to advertisers who are seeking to be less dependent on Facebook.  Unlike the younger and more promising social media app Tiktok, Snapchat has actually been around for longer than we normally think. Snapchat was launched back in 2011 […]