One of the hardest parts of running campaigns on Facebook and Instagram Ads is launching your first ad. This isn’t because it’s technical or requires some special assistance, but because you never know where exactly to start. The first step is always digesting massive amounts of information and hours of analyzing data, and then you’re either picking up where the previous marketer left off or building an ad from scratch. Like building a brand new house, the foundation matters the most and that’s why it’s the hardest part of campaign management.

I waited for my 30th blog to share how I generally structure my campaigns. This is not because I didn’t want to share it, but because I don’t think that copying my structure and pasting it to your campaigns is always a good idea. If you have read my previous blogs, you know that I strongly believe that strategy needs to be built around your product and not the other way around. That means that your product needs to be the main factor of how your campaigns will be structured. If your product thrives on Instagram, that should be the content focus. If your products a slower nurturing funnel, your campaigns should reflect that. Maybe your demographics respond better to videos, or organic posts, or perhaps you might have a big audience that is worth leveraging. All of these factors will change how your campaigns will be created. There is no one-copy-fits-all solution. If you are looking for a fast plug-and-play solution, this post is not your destination. In the following post I will reveal the methodology I use and the naming conventions I utilize when creating my campaigns. I compiled a list of 11 rules that I normally use when creating new campaigns to give you a better understanding of how my campaigns are structured and the reasoning behind their setup.

Yes! Although it doesn’t have an impact on a campaign’s performance, that’s exactly the reason why it’s the first rule. Systematically naming your campaigns allows you to search and analyze in seconds what works and what doesn’t. For example, just by labeling my campaigns with the type of ad format, I am using in my conversion campaign, I can filter with just two words and see how this type of ad format is performing across all of my campaigns. 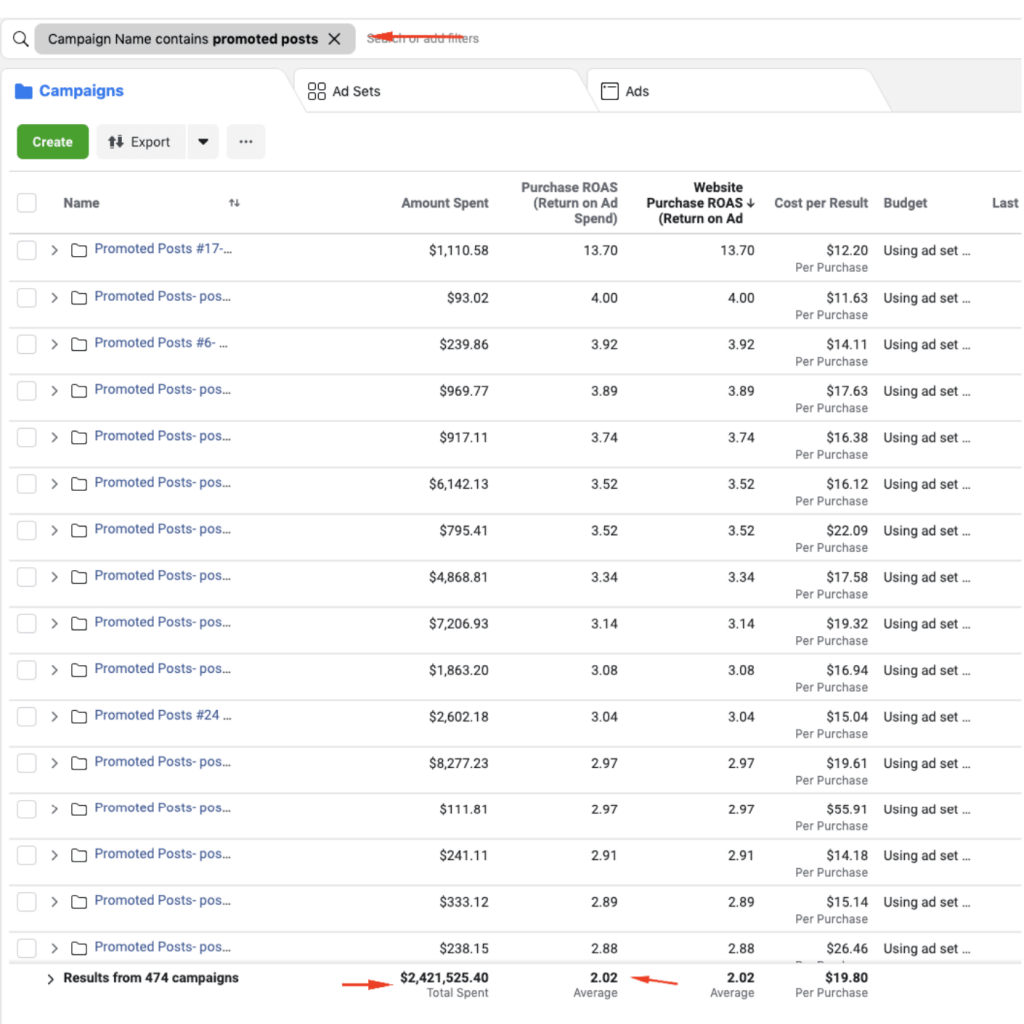 In the example above, I chose to label the ad format on the campaign level. With one click filter, I can see how this ad format performs on an overall basis and compare it to the other formats. The same can be done here to exclude this type of ad format to see how it performs compared to the others. In the example below, I excluded all campaigns that use this ad format. As you can see, the results of the other campaigns are better in terms of ROAS. 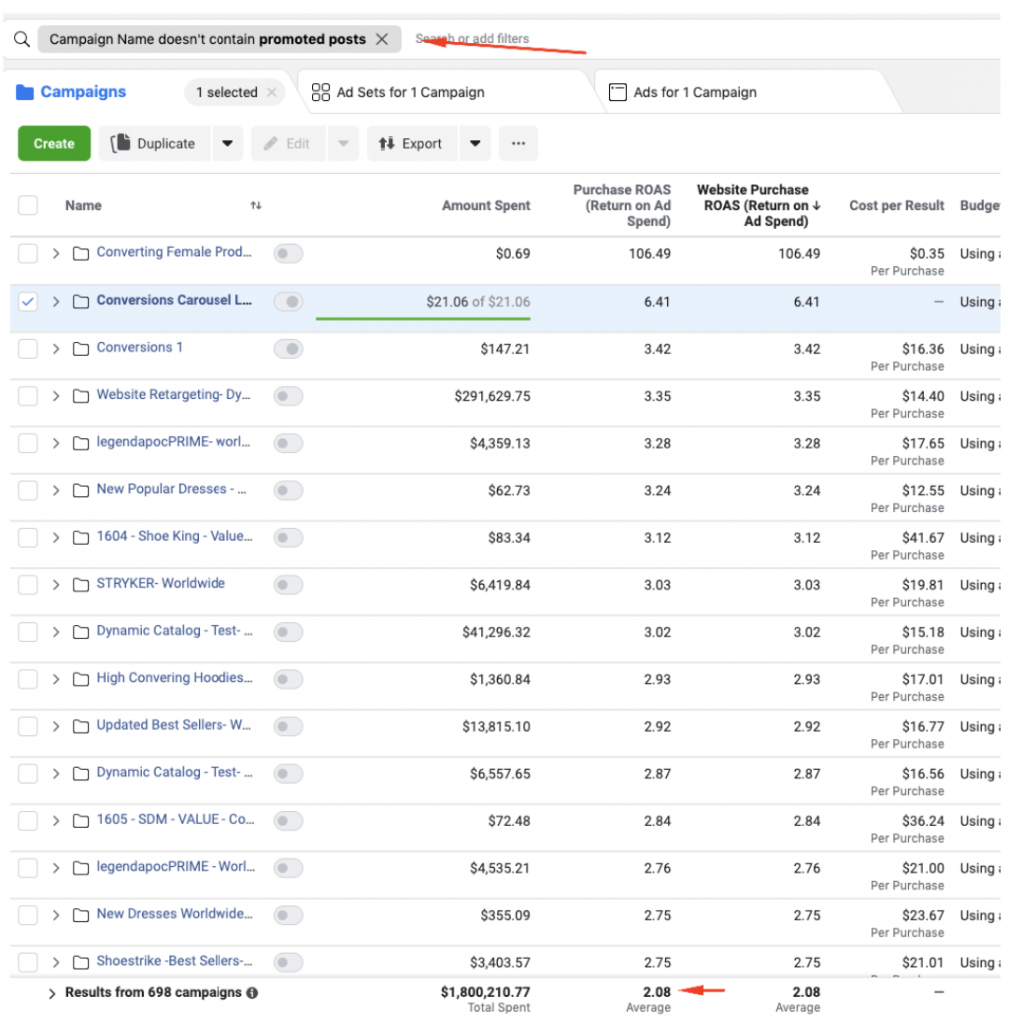 And the same can be done on an ad set level to understand which targeting works best, and as well as on an ad set level to understand what creative or copy is most effective. Many marketers fail because they either evaluate their metrics based on a single campaign, ad set or ad level and don’t have a sufficient amount of data, or because they don’t know how to systematically name their campaigns.

There are several ways to add automatic naming conversions directly to your ads manager.

Rule 2: It must be a conversion objective

This rule is second only because of the methodology of this post. It’s the most important thing. Whatever your goal is, it must remain under a conversion objective. Views, page likes, engagement, traffic, and, of course, sales will come through in your conversion campaigns. It would be an unwise decision to run other objective campaigns to promote these actions. When you run a conversion campaign, people will still engage, click, and follow, but your campaigns will only be geared towards getting conversions. Also, bringing people to your funnel who are not likely to convert, but likely to engage is doubling your loss as they will get stuck in your funnel and you will probably spend more money on them in the feature on remarketing or email funnels.

Rule 3: Use a campaign to test a different concept, ad format, or promotion

Just like in traditional marketing, a new campaign proposes a new idea or a new promotion. There is no sense to create a new campaign simply to test a new copy or image.

Below is the hierarchy of ads.

If your structure is different, you might be working against the optimization algorithm and not leveraging its full potential.

Rule 4: Effective and logical segmentation on an ad set level

One of the most common mistakes that many advertisers make is the number of different variables they use on an ad set level. They use more than one interest per ad set, and use different demographics in the other ad set to find the winning combination. My question to them is always the same. If you are using so many different variables in each ad set, how will you know which one made a positive impact? The golden rule is always only one variable that should be different in each ad set, whether it’s audience, interests, demographics, or location. Use only one variable so when one ad set performs better than the other, you will know that the change of that variable is what likely made the difference.

This goes along with the third rule. If you are manipulating one variable on an ad set level to determine which has an impact on performance, then your ads in every ad set might be the same. If your ads are different in each ad set and the targeting is different as well, how will you know if it’s the targeting that caused the impact or the ads in that specific ad set? Use the same ads in every ad set. It doesn’t mean that it needs to be just one ad. You can use many, but duplicate them across all ad sets to ensure your tests are conclusions are logical.

Rule 6: Use four to six different ads in every ad set

In previous years, you would find that Facebook would recommend one or two ads per ad set in their illustrations. Those illustrations are gone because their optimization algorithm has greatly evolved. Now, it can process massive amounts of data and make predictions at a rapid rate, which leaves room for heavier campaigns. This means that when you give it four to six different ads to work with, it can dynamically decide which ad to serve to which user and alternative delivery. One user might respond better to one creative while another might respond better to a different type of copy. If you are using multiple ads, you are not forcing it to deliver the same ad to all users and giving it the freedom to effectively match users to creatives. Also, by grouping, many ads in the same ad set you will accelerate the learning phase of the ad set and will likely complete the learning phase of the ad set faster.

Yes, advertisers do it often and might get good performance, but I argue that it’s not just about performance here. Facebook always favors ads that are more engaging than others. Video ads will virtually always perform better than image ads in terms of engagement, as they autoplay for many users. Autoplay counts as engagement and that will lead to favoring delivery over image ads and it won’t be a fair battle.

Also, it will impact the way you analyze your reports as ad formats will be mixed in campaigns together. Based on my experience, it’s most effective to separate campaigns based on formats and use testing in ads to test different creatives using the same formats and different copies.

My approach is always to leverage as much machine learning as possible. In addition to the static campaigns that I listed above, I always create a dynamic broad campaign with no targeting and feed the optimization algorithm with many different creatives and text copies and let it go to work. By using both dynamic creative campaigns and static creative campaigns, I can test which method performs better.

This is only relevant if you have a product feed and you are an e-commerce business. Dynamic ads for a broad audience (DABA) uses machine learning capabilities and match your products dynamically with the most relevant audience based on their activity on or off Facebook. Ads are shown to users in a carousel and the products change dynamically. I create my ads in a separate campaign with no targeting selection besides geolocation and relevant demographics. The key is to give the algorithm as much freedom and the broadest options possible.

Many advertisers like to make use of this feature much more often, but I simply use it to automate delivery and bids across my ad sets. Instead of having to manually set a bid for each ad set and monitor and edit it daily, I simply move it over to a campaign level and set my goals and budget. The algorithm knows much better how to allocate the delivery and spend between the ad sets. This saves time and maximizes performance by moving to budget towards the campaign level. The budget is pooled and more opportunities become available.

Creating remarketing campaigns raises an interesting debate. How many ads should you show a person and is it worth showing a person two ads instead of showing two different users one ad? My remarketing campaigns always target users who have made a strong intent other than visiting the website. I target users who added to cart, initiated checkout, or opted into a lead. I don’t retarget users who simply watched a video, viewed an ad, or visited the website and didn’t take any action. I would rather use that money to attract new users who might be interested in the product.

Also, my remarketing campaigns are time-sensitive. Depending on the type of service or product, I have rarely seen well-paid ad funnels that take more than 30 days from the discovery stage to convert. To bug someone in his newsfeed with the same ads for a period longer than that could be aggravating to users. For high-intent products or services, I normally remarket the audience for up to 14 days since their last visit. For low to slow intent products or services, I normally remarket up to 30 days since their last visit. Be wise with the amount of spend on remarketing and understand that every dollar that goes into remarketing comes off your prospecting (cold traffic) budget. If someone has seen your ads multiple times and hasn’t shown interest, move on – there is many fish in the sea.

Just like the hardest part of writing a book is writing the first few words, creating new campaigns for the first time feels somewhat the same. Because they don’t teach you how to create your campaigns in school, there are many different methods of creating and structuring campaigns. I created a list of rules that I use to create my Facebook and Instagram campaigns. Although they don’t fit and shouldn’t be used for every business, they provide a framework to logically create your campaigns to maximize performance. 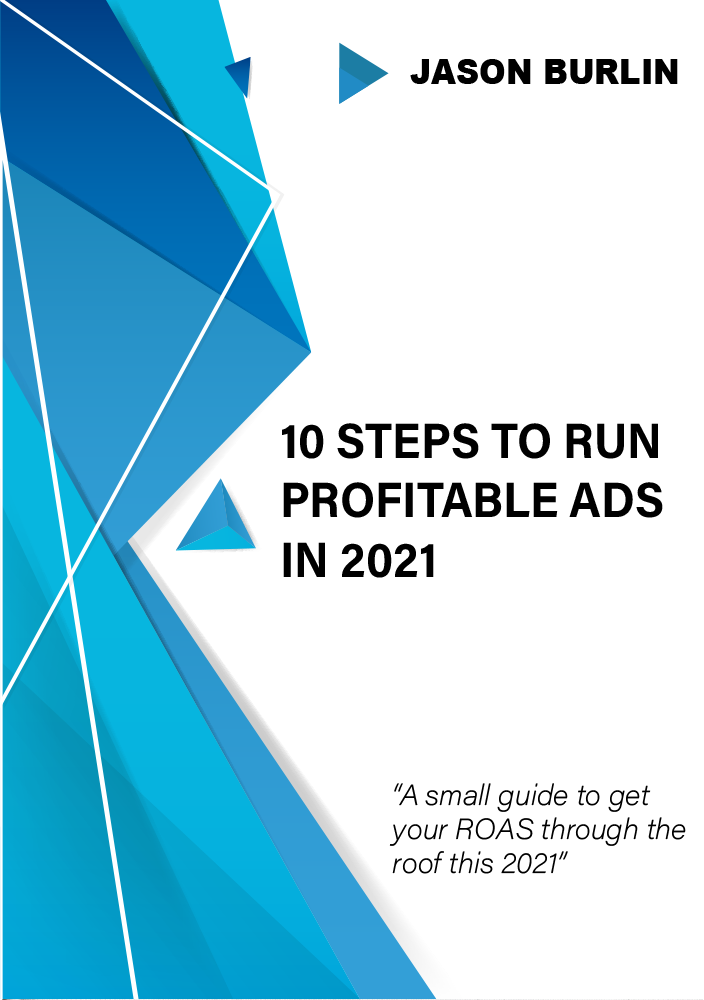 By entering your email, you'll be subscribed to the Jason Burlin newsletter. You can unsubscribe anytime.

THE RISKS OF DISPLAY ADVERTISING