Everyone can agree that social proof matters. Social proof in ads is the engagement tied to the ad itself that shows you how many users engaged with the ad. It includes likes, comments, and shares, and indicates how popular an ad is online. Nobody actually thinks that adding social proof to your ads is a bad idea, but many advertisers tend to forget that it’s an option, or they simply ignore it.

Humans are social creatures. We were social creatures since the day that we were created and long before any social media platform existed. Social proof is found everywhere. Our need to belong to a group and be part of a certain society runs deep in our veins and is tattooed on our DNA. Picture yourself walking by two restaurants. They both look very similar and one of them has no people sitting in it, while the other is full of people. What’s the first thing that you would think about the restaurant that’s full of people? That it probably has great food. If a lot of people are going there, there is probably a reason for it. But it’s more than food. Why do we pick the clothes that we buy? What about the artists we like and the people we follow? Why is it that most people have very few followers while a very small percentage have millions? Is there anything that shapes our views more than other peoples’ opinions?

These social behavior fundamentals create social proof, and if you’re running ads on social platforms and are neglecting to use it, you’re making a huge mistake.

The benefits of using social proof in ads have a history of debate, with scientific a/b testing trying to determine the real impact of social proof. From all the studies that have been done, I found many that conclude that it makes a positive impact, few that don’t find any impact and not a single one that finds a negative impact. Let’s be reasonable, nobody thinks that can harm performance, but some believe it might not be worth the effort. One of the biggest issues with evaluating the value of social proof lies in evaluating the wrong metrics.

Advertisers expect miracles from using social proof in their ads and end up evaluating the wrong metrics. When they run a/b tests to determine impact, they evaluate metrics like cost per action and ROAS. It would be unreasonable to expect social proof to make an across-the-board impact on every single ad it’s being used on. If someone does or does not have an intent to purchase a product, you shouldn’t expect social proof on ads to have such a big impact. There are so many factors involved in making a purchase and social proof is most likely not one of the top ones.

In many cases, it can help with establishing credibility and creating an uplift in ROAS performance, but other metrics matter as well. If people see an ad with high engagement, they are more likely to engage as well. Nobody likes a lonely ad. A lonely ad is an ad that has a lot of views with views little to no engagement at all. How do we perceive an ad with zero likes or comments? We tend to find it irrelevant. Take a look at these two posts below for example: 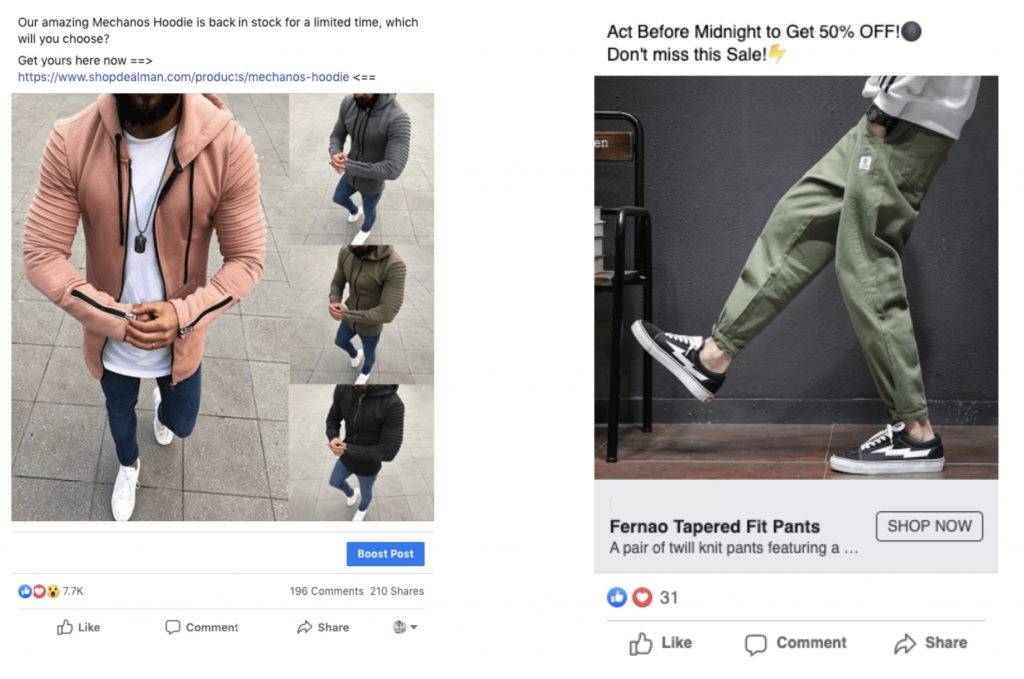 The first post has more than 7000 likes and 200 shares and comments, while the other one has 31 likes. You don’t have to be a behavioral psychologist to understand what a difference this can make. Social proof should always be measured by important metrics like CTR (click-through rate), engagement rate, and delivery rate. If your ad gets a higher CTR as a result of the social proof on ads, you will get more visitors to your website at a lower cost.

Also, engagement leads to another engagement, because users tend to follow the herd. If you were a user, and if both posts had the same product, which of the above would you be more likely to like or comment on? Let me take a wild guess – the post with the 7,000 likes. Higher engagement on ads leads to lower ad costs and more delivery. Facebook favors ads with more engagement as they consider them more relevant. This leads to a higher chance of winning more auctions (bidding for ad delivery) on the platforms at a lower cost. Facebook doesn’t just factor in how much you are willing to pay to get delivery for your ad, they also factor relevance rate and quality of the ad. An ad with social proof will be classified as an engaging ad, thus beating out less engaging ads in auctions and will be delivered to the same audience at a lower cost.

How to use social proof in ads

Now that we discussed the value of social proof, let’s discuss how it should be used in ads. If you read my previous article, (NEVER) BOOST YOUR PAGE POSTS, you know that I believe that every dollar matters and therefore should be geared towards performance only. Unless you are a marketing giant, nobody has extra money to throw around just to build social proof. Also, it can be counter-productive to just promote your ad to get cheap likes and comments, as those users will enter your marketing funnel and you might end up spending more money on them down the line (remarketing, email lists, etc). The goal is to stay performance-based from day one while incorporating social proof in the ads. 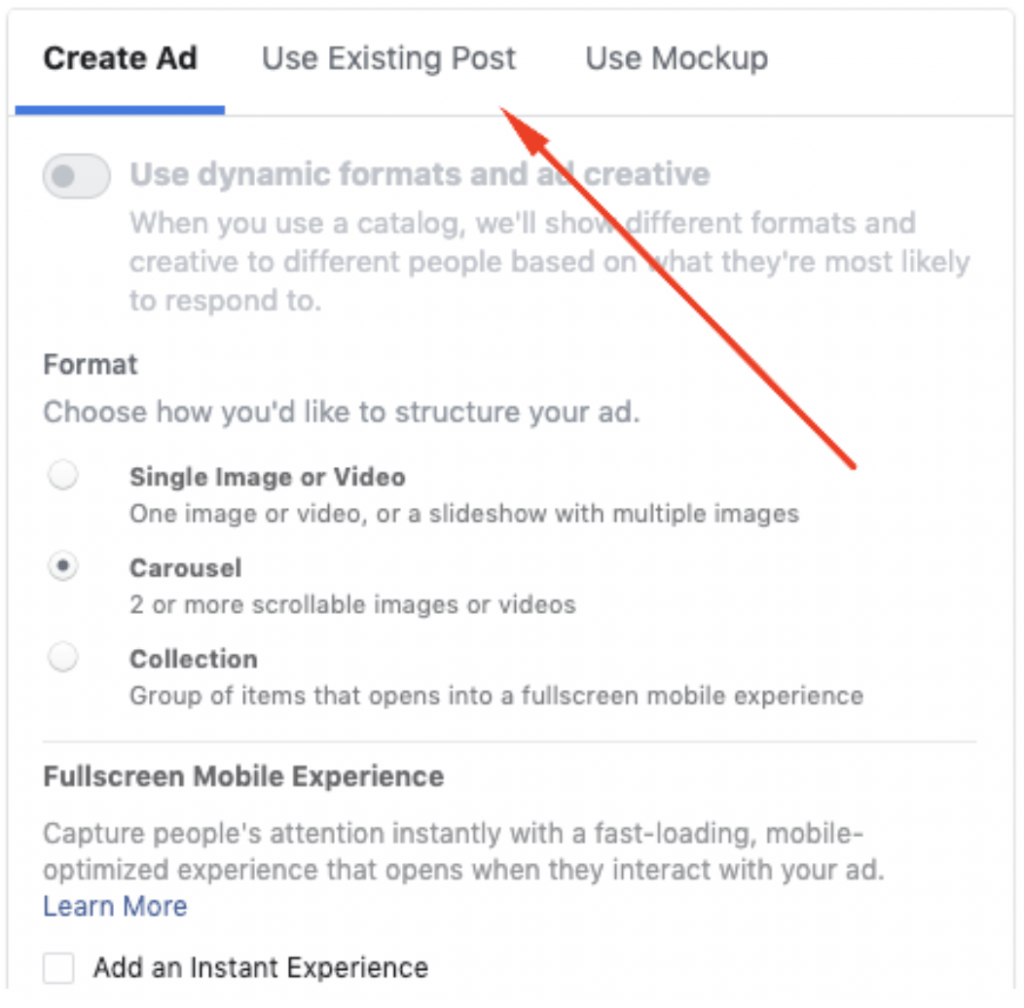 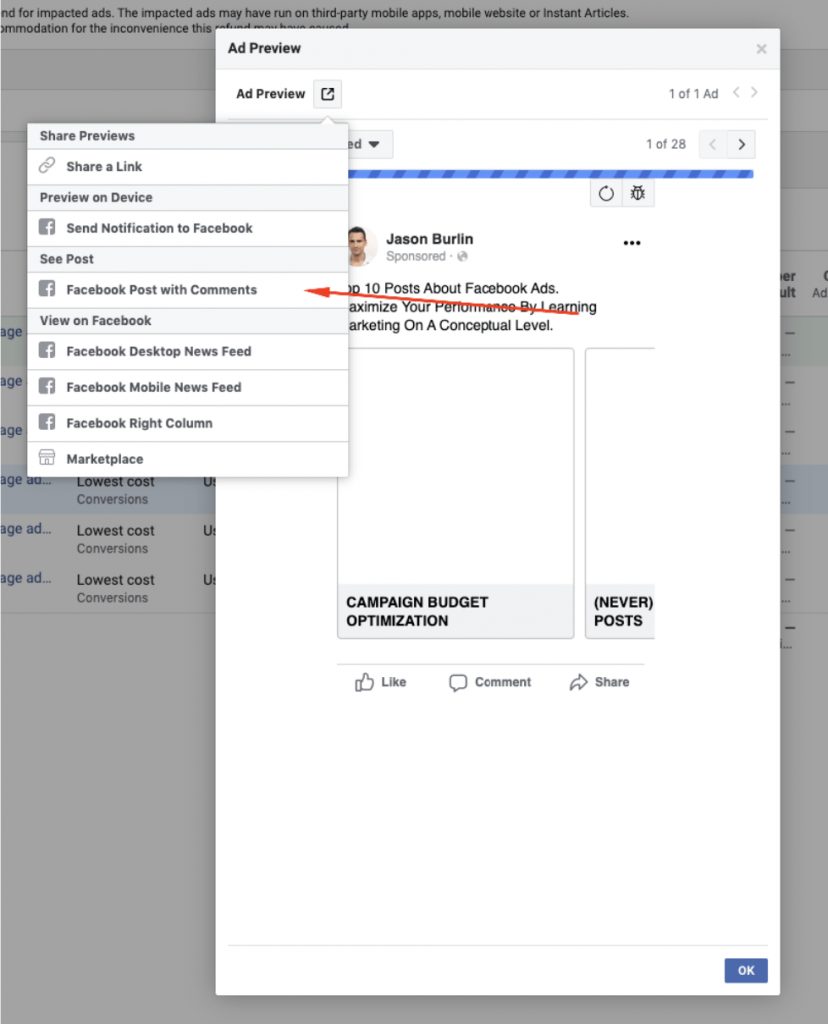 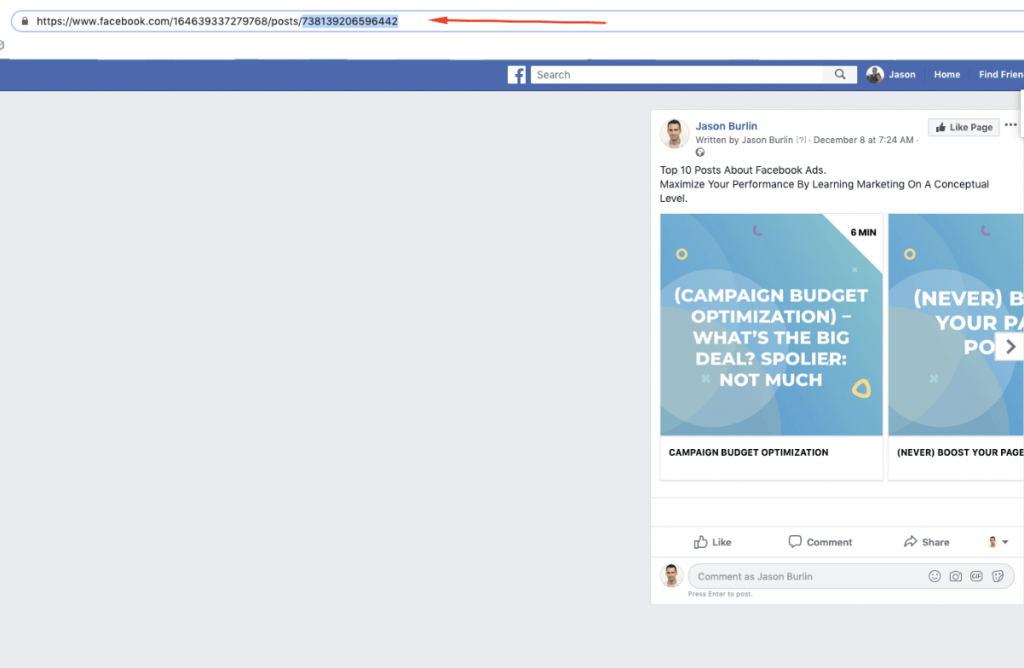 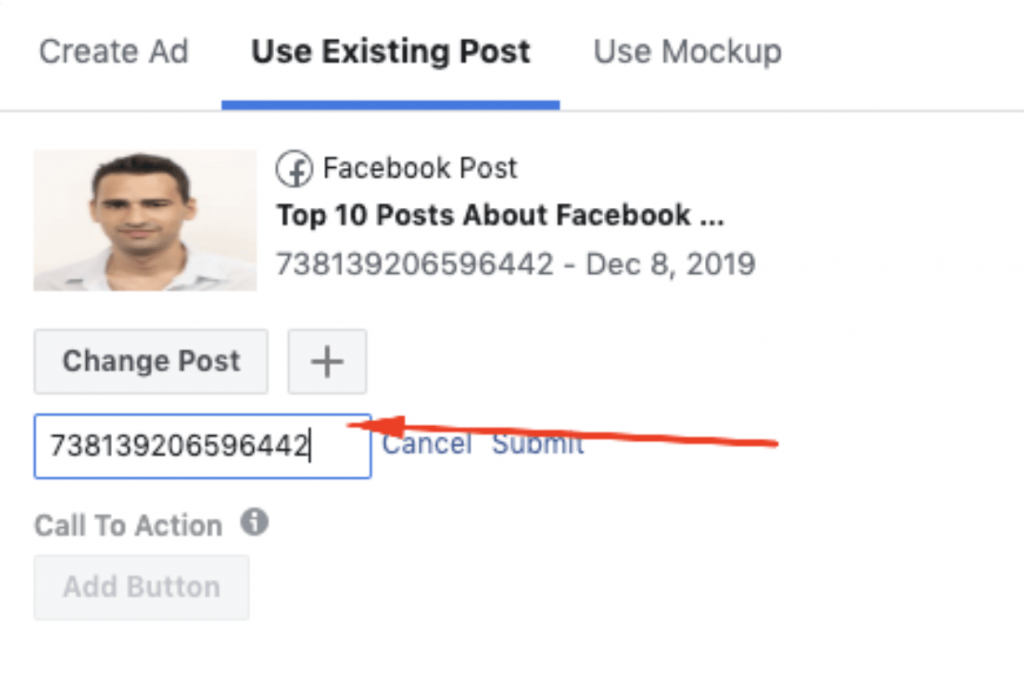 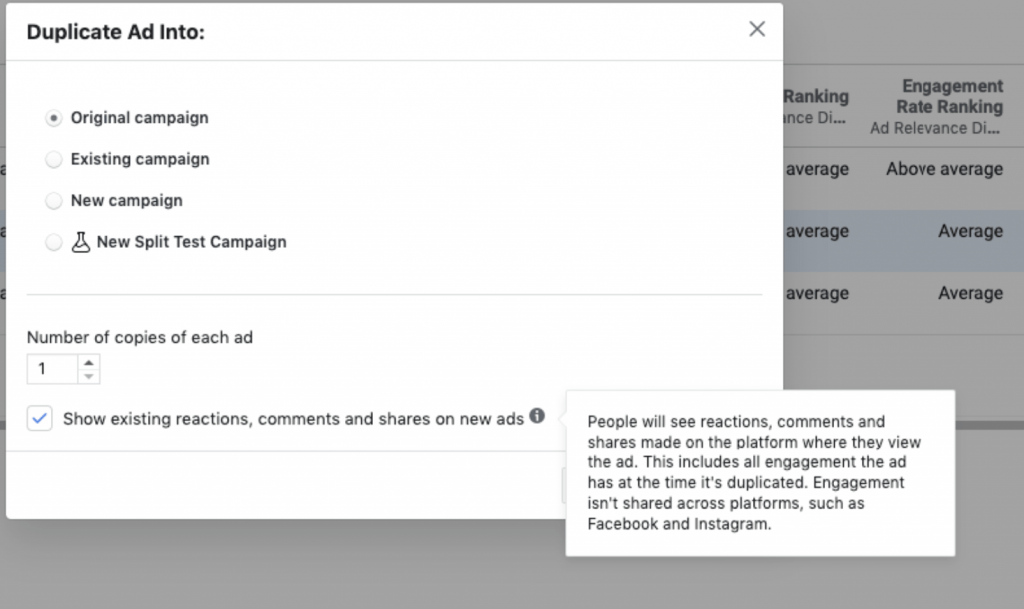 The main issue with this feature is it only transfers engagement from the past at the time of the duplication. Future engagement won’t be shared between ads. It’s better than nothing, but I highly recommend either using existing posts or ad ID to group as much engagement as possible to a single ad.

Humans are social creatures. Our need to be accepted by society and the need to belong has created many different phenomena, one of which is social proof. Social proof can be found in everything that we do and everything that shapes our opinions and desires. Social proof plays a major role on Facebook and Instagram. Ads with social proof perform better than ads without social proof. There are several ways to use social proof in ads which include use existing posts in ads, or using the same ad ID in every campaign to group all engagement into one ad. Your goal as an advertiser is to generate as much engagement as possible towards your best-performing ads to maximize your campaigns’ performance.

We all know the words to this song. The rhythm keeps changing but the words are the same.  Advertisers relentlessly swear that Facebook ads don’t work anymore. I find it amusing. If they don’t work, why do advertisers still spend money on the platform? Shouldn’t that mean that ad costs will go down if fewer […]

Read the first chapter of Win Paid Advertising for FREE

By entering your email, you'll be subscribed to the Jason Burlin newsletter. You can unsubscribe anytime. 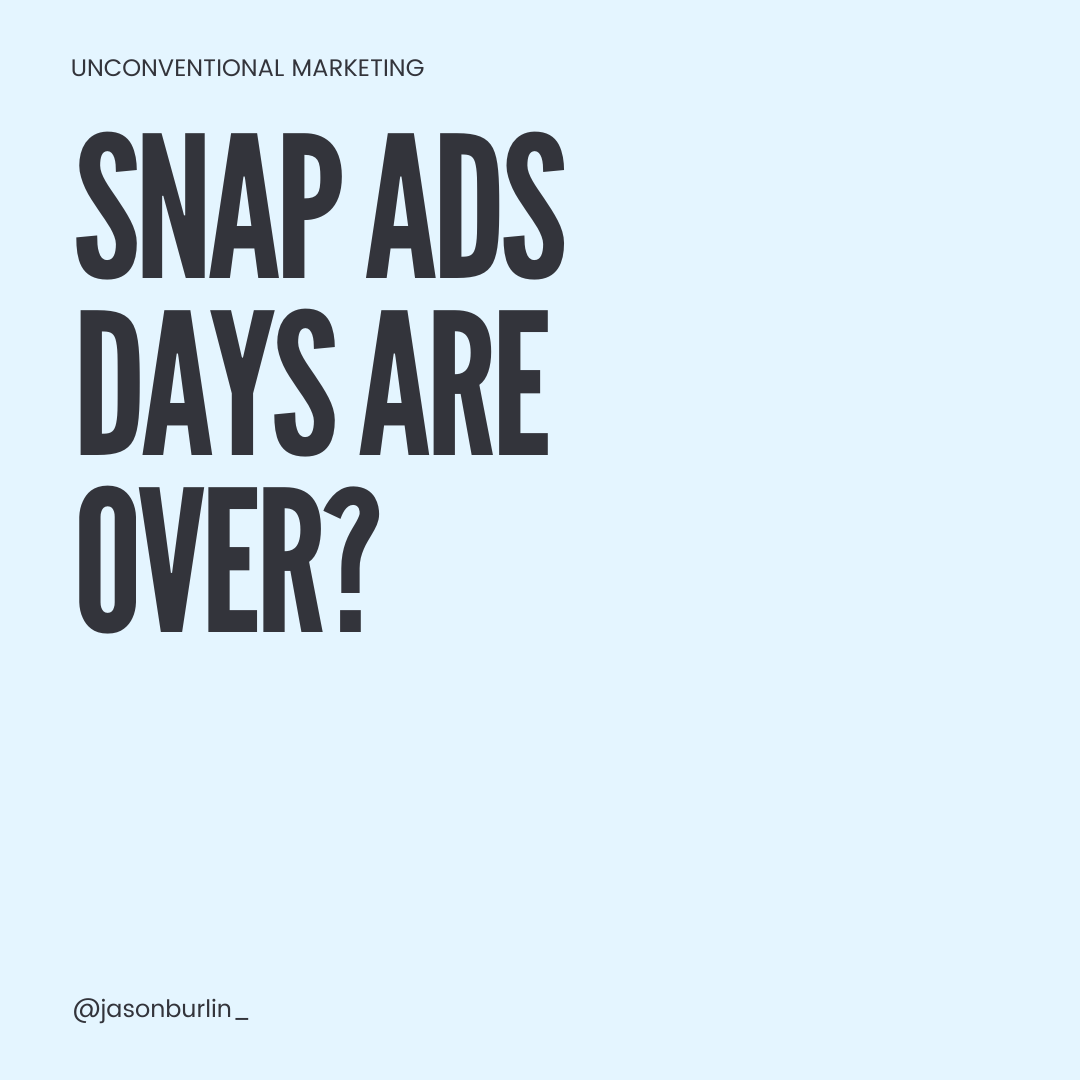 Snap Ads Days Are Over?