Although value optimization was launched more than a year ago, many advertisers are not familiar with this option or don’t use it in their ads very often.

Facebook defines value optimization as follows: “optimizing for value tells our delivery system to show your ads to people who are likely to maximize the amount of value they generate. By ‘value,’ we mean how much revenue (as reported by the ‘value’ field of reporting) a person generates within a day or a week (depending on which conversion window you choose) of a given purchase event.”

If it sounds confusing, let me simplify it. Instead of just optimizing your ads to find conversions at a good cost, Facebook will try to optimize your ads towards people who are likely to spend more money, thus increasing your return on investment.

Facebook added a really simple illustration to explain this. In blue is the regular optimization for conversion. In yellow is the value optimization method. 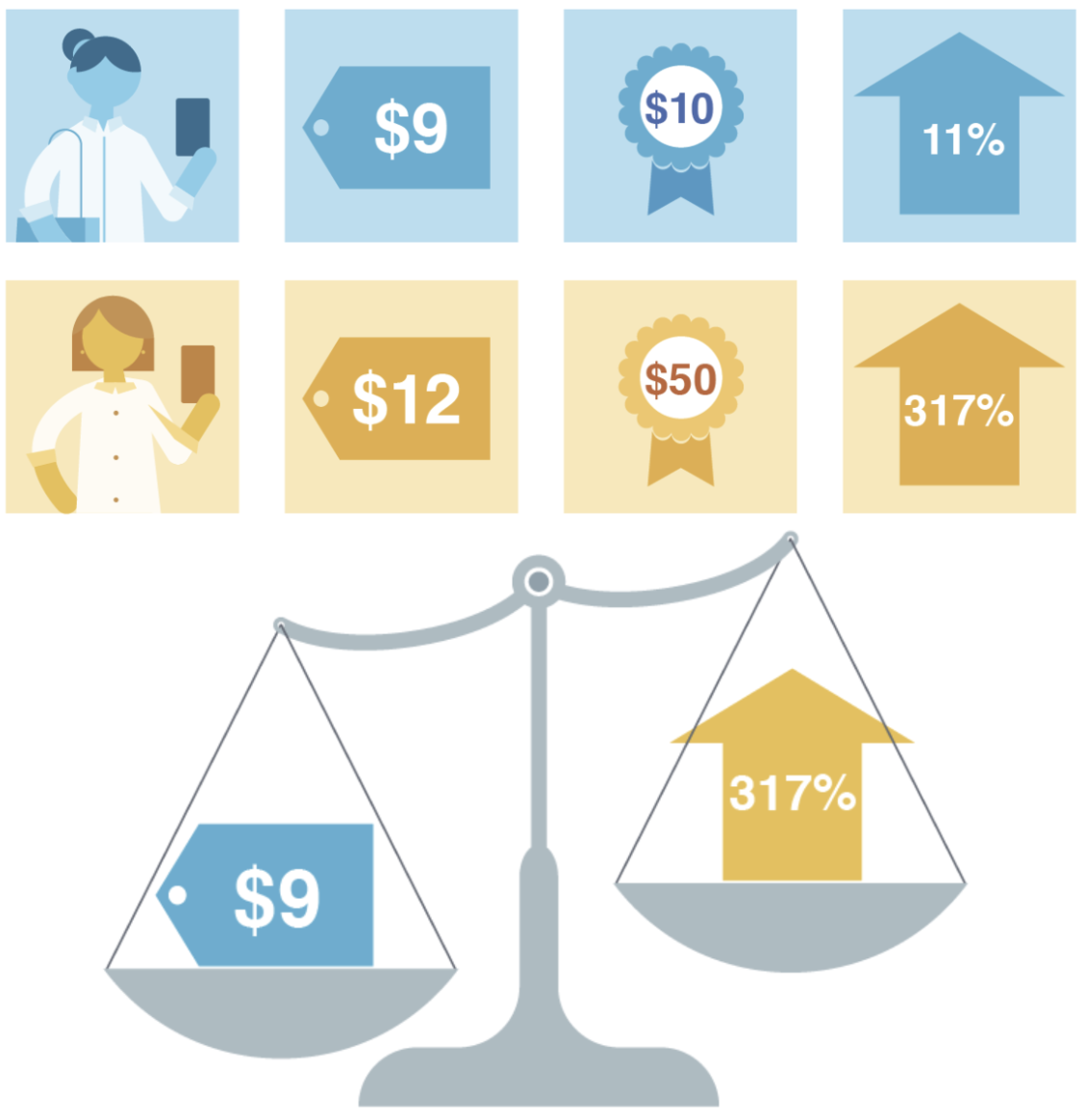 Using the above illustration we see that when you target higher spenders you will probably pay a higher price per conversion because this audience is considered more competitive.

For example, someone who spends $1000 per week on online shopping will be more expensive to target than someone who spends $50 per week, right? You can’t target specific people, but Facebook groups different people together based on their purchasing behavior for better and more accurate advertising performance.

The main factor you should understand is that Facebook is stating that when using value optimization, you should evaluate the return on ad spend and not cost per conversion. What difference does it make if your cost per conversion is $5 higher if your ROI is better? As long as we are getting a better ROI (more profits), the cost per purchase is irrelevant, isn’t it? Essentially it’s the same as evaluating cost per click versus your cost per purchase/action.

If your cost per conversion decreases because your ads are performing well, does it make a difference if your cost per click increases? The answer is no – it’s irrelevant.

Think of value optimization as a method for focusing on the conversions that are likely to be worth the most to you in terms of revenue generated. Also, value optimization now supports cost controls which means that you can set a minimum return on ad spend (ROAS) in your goals, which means that Facebook tries to find conversions that will deliver your minimum ROAS requirement or higher. When you launch your campaigns with value optimization, Facebook will prioritize all the higher-value potential customers first and then work its way down once it starts running out of opportunities.

If your ad account currently has value feature enabled, you will find it here. 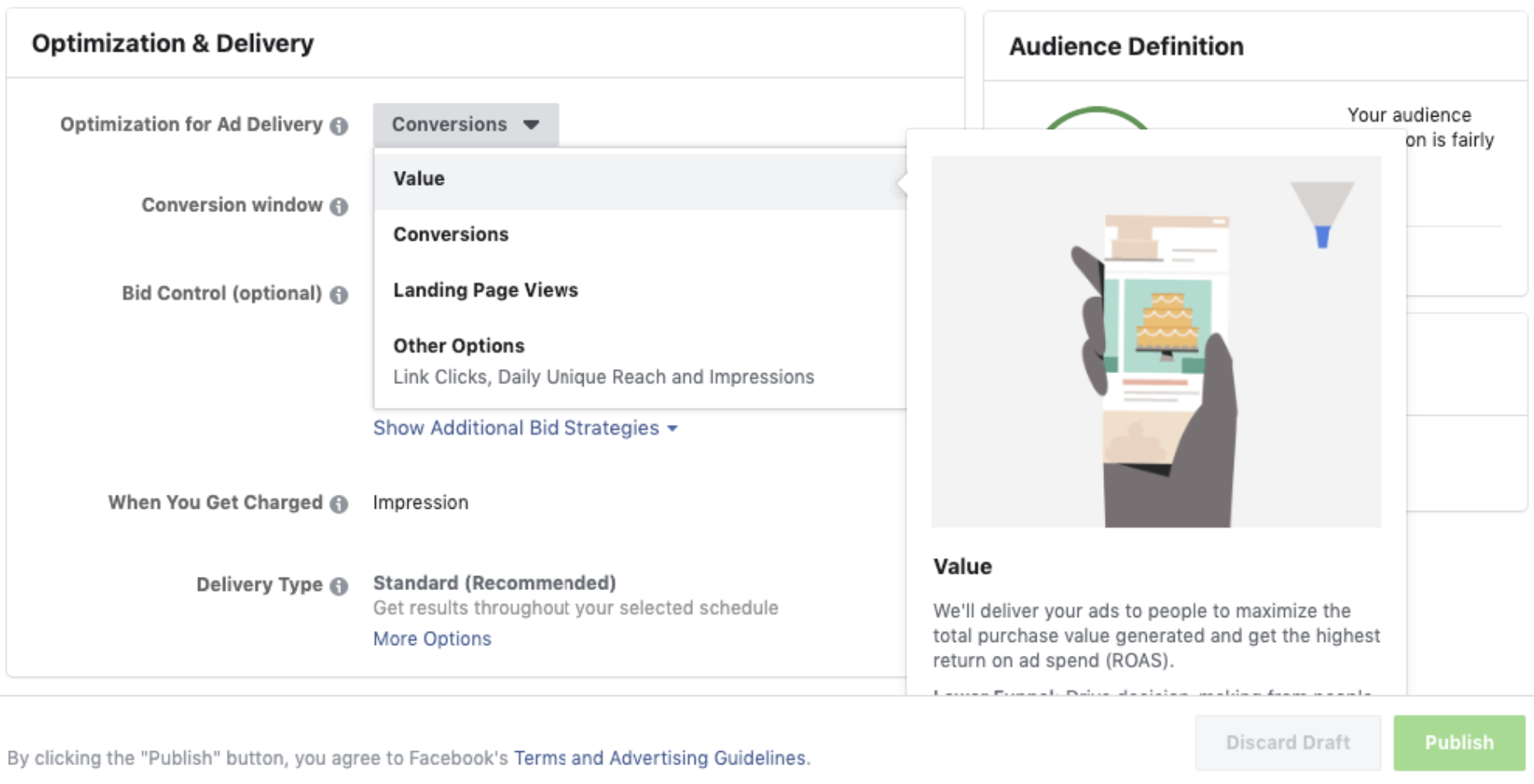 Here, you will be able to select the minimum ROAS goals for the campaign. Generally speaking, the rule of thumb is to have your ROAS goal 20% lower than your actual goals, as the prediction model could be inaccurate and you don’t want to miss out on conversions. If you leave this blank, it will work similarly to using no cost controls. That is, Facebook will look for the higher value conversions at all times without considering your ROAS goals. By using a minimum ROAS goal, Facebook will only deliver your ads when it predicts it would be able to get you conversions that will meet your goals.

To use value optimization, your pixel needs to have enough data to utilize it. Below are the pixel requirements:

Note: Access can take up to one week from the time the pixel or product catalog is eligible as the system takes time to recognize conversions coming through. View full requirements here.

WHEN SHOULD YOU USE VALUE CAMPAIGNS?

Understanding that the use of value optimization can be effective is one thing, understanding how to use it most effectively is much more complex.

Last year, I noted that large advertisers were spending at least half of their budget on value campaigns and getting amazing results. Since then, the use of value optimization started slowly declining because of a decrease in performance and unsteady results. It makes sense. Like every new feature that starts hot, competition is initially low, and then slowly it starts to deteriorate.

If the demand increased and more advertisers moved over to this optimization method, while the supply (high-value customers) remained the same, performance will get worse. Currently, I recommend creating value campaigns for your best performing campaigns/ad sets only.

Value optimization was first introduced as an optimization tool to allow you to target and optimize based on return on ad spend and not cost per purchase. Instead of focusing on measuring your cost per purchase, you can focus on your most important metric, which is the return on ad spend (ROAS) and optimize campaigns strictly based on that metric.

Value optimization works by finding the people who are likely to spend the most money in each audience group. Value optimization requires your ad account to have a lot of data before it becomes available and works less effectively than when it was initially introduced.

One-product shops or lead generation companies can’t utilize this feature and results tend to be less steady than regular conversion campaigns which limit the scaling of ad spend for advertisers who use this optimization feature.